On the Concept of the Crisis 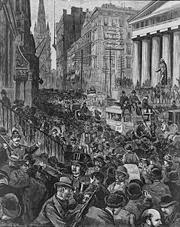 Whether it's the most recent financial scandal, political calamity, or environmental catastrophe, social life these days is presented - if not experienced - as a succession of crises. Indeed, the ongoing economic crisis alone has generated its own considerable brood of sub-crises: the foreclosure crisis, the jobs crisis (aka the unemployment/poverty crisis), not to mention the health care crisis, and the perennial, ideologically distorted, debt crisis are accompanied by still others. And with the government shutdown here in the US, and the related debt ceiling crisis, we encounter this succession of crises' latest incarnation - one that, no doubt, will provide yet another pretext for the privatizing classes, and their acolytes, to further realize their longstanding dream of totalized privatization (eliminating the public wherever it appears: in public schools, social security, medicare, public lands, etc.). In light of all this, a consideration of the concept of the crisis may not only contribute to a clarification of the present political-economic situation, but may aid in our shaking free from it as well.

While the word 'crisis' is rooted in the Greek term krinein - which means to separate, distinguish, critique, or judge - by the time the Hippocratic Corpus was assembled in the beginning of the fifth century BCE, the concept had acquired an important place in ancient medical theory. According to this, a crisis is a turning point in the development of a disease - a point at which a patient's disease begins to either intensify or diminish. Because Hippocrates, among other ancient thinkers, held that the organism possessed an intrinsic healing capacity, he argued that the job of the physician was to pay attention to such crises (thought to occur preponderantly on what were termed "critical days"), adjusting the patient's treatment to facilitate this natural healing process. According to the theory, successful interventions in crises allowed the patient to recover her or his health.

Elaborating upon this, the legendary Roman physician, philosopher, and medical theorist Galen made significant  contributions to the development of the theory of the crisis. Writing and practicing in the second century of the common era, Galen's theories would spread throughout the Roman Empire, influencing the practice of medicine in much of the world until well into the 19th century. And while much of Galen's work would be superseded by ensuing medical discoveries, his theory of the crisis is considerably contemporary. Indeed, insofar as this theory of the crisis is comparable to a notion of a rupture or break in the causal chain of history - enabling an intervention into, and an alteration of, what would otherwise have been a more or less predetermined sequence - the classical concept of the crisis finds curious analogues in early 21st century political and philosophical thought. In some respects it is inseparable from the French philosopher Alain Badiou's concept of the Event. Roughly defined as a moment of truth that emerges from a more or less predetermined "situation," an "event" is contingent upon that disruption, interruption, or other type of rupture of the inertial "situation" that allows the event - the genuinely new - to emerge. Comparable to just such a rupture, the classical medical notion of a crisis in many respects amounts to an event's precondition. For what is a crisis if not a gap in the regular advance of a disease that allows for the turn to not only the patient's recovery, but for a new health - not just a new life, but a better life - to emerge?

Among other things the present shutdown "crisis" (and contemporary crises in general) conforms to this classical, medical definition. For a crisis is just such a turning point from which things can improve or worsen - a point from which the otherwise determined chain of events becomes indeterminate. Since the crisis is the point from which recovery can begin, Galen and Hippocrates would likely agree with the US politician Rahm Emanuel's well-known statement that "you never want a serious crisis to go to waste." However, while Galen and Hippocrates might agree with Rahm Emanuel's position concerning the importance of crises, it seems exceptionally unlikely that they would agree with Rahm Emanuel's prognoses, or recommended course of treatment.

Before discussing crises further, it is crucial to distinguish between what are, ultimately, deeply political and ideological categories: critical notions of health and non-critical notions of health. Among other forms, the latter tend to manifest as fetishizations of health. Marked not only by a narrow focus on superficial or one-sided aspects of overall health (obsessive exercise regimens, for instance, or a hyper vigilance concerning matters of nutrition), these practices tend to amount to decidedly unhealthy compulsions. Practiced in generally toxic social and physical environments, these generally relate less to actual health than to what are more often than not pathological concerns with purity. Literally dis-easing (disrupting ease), such non-critical practices and regimens prove themselves to be not actually healthy so much as health's mere semblance. A critical notion of health, on the other hand, concerns itself less with individual health than with the distributions of the concrete social conditions and social practices requisite for the realization of an egalitarian society and general social (and individual) well being.

That said, though such politicians as Rahm Emanuel may recognize that crises are important for advancing the goals of their political-economic class, the policies they advance do not lead to anything more than the most narrow notion of health. Among other things, these lead to not only disease in the literal sense of a (general) diminution of ease; they also contribute to and perpetuate disease in the more chronic sense; for their economic policies are inextricable from occupational and social stresses which lead directly to heart disease and cancer, not to mention poverty and homelessness, among other ills. Moreover, endless production also results in ever more pollution, resource destruction, ecocide, and global warming (and, consequently, droughts, malnourishment, famine, and war, to name just some of the more prominent manifestations of socioeconomic disease endemic to this political-economy).

Although people are in many respects aware of the fact that the present manner of organizing society is destroying the planet (along with our lives) the inertial situation continues. And while these potential turning points (these crises) come along regularly, for  various reasons no salutary intervention seems possible. Instead of actually salutary, emancipatory interventions, various short-term treatments are distributed by the present Order to maintain social stability. Rather than treating the root of the problem, the existing Order treats its symptoms. In general, this treatment proceeds by way of the extremely profitable sale of pain-killing and sleep-inducing anesthetics. Beyond the more conventional aspects of the anesthetics industry (represented traditionally by alcohol, street drugs, TV, and religion), with the advance of the general algia over the past few decades, new anesthetics have gained prominence. Anti-depressant and anti-anxiety drugs like Prozac, Paxil, Zoloft, and Klonopin have become top-selling pharmaceuticals. Along with the other 'opiates of the masses', smart phones, endless television channels, and other forms of entertainment ensure that people are properly entertained, maintained, and contained. And as the general algia (which includes the sickness of the ecosystem) grows ever more extreme, more and more extreme forms of anesthetics are developed simply to keep up. Such practices as extreme sports, and the concentration of sex into extreme, unlimited amounts of pornography, as well as the intensification and proliferation of street drugs, chart this progress.

If anesthetics and the anesthetics industry is as prevalent as it is, though, it is important to note that the opposite of anesthetics is aesthetics. Defined broadly as the critical examination of art, culture, and nature, more than just the opposite of anesthetics, aesthetics may be regarded as its corrective. As opposed to the practice of a narrow, uncritical aesthetics (which tends to spend its energy pondering the latest series of dots, installation of wires, or other such derivative anesthetic consumer items) a critical aesthetics not only analyzes the relationships and intersections between  "culture" and "nature." In addition to paying attention to, and participating in, the arrival of crises, a critical aesthetics  recognizes that it redirects society to the extent that it reinterprets it; redirecting it from the general algia - from a world of generalized disease - to one of radical Ease.

Concerning Ease - and returning to Hippocrates and Galen - it is important to consider the fact that what Hippocrates and Galen most often prescribed for their patients was not medicine so much as rest. Believing that the organism's innate healing power (thevis medicatrix naturae) allowed it to heal itself, and that rest enabled this best, they maintained that ease was required to overcome disease. According to this view (supported by contemporary medical research, incidentally), the physician's role is to create the conditions that allow the body to heal. With this in mind, it should not be too difficult to imagine Galen or Hippocrates prescribing just such a treatment for this society.

As anathema as it may be to the capitalist Order - which requires unlimited expansion and work - health and crises demand just the opposite. For although it is necessary for health, rest is opposed to the economic functioning of capitalism. In spite of the harms its deprivation causes, rest is systematically subordinated to the dictates of the economy. Absent certain environmental crises, not even the sky is afforded any rest. To be sure, it is worth recalling the fact that the April 2010 eruption of the Eyjafjallajokull volcano in Iceland led to the grounding of thousands of air flights. Though less discussed than the economic loss engendered by the cancellation of so many flights, the cessation of air traffic also resulted in the elimination of an estimated 1.3 to 2.8 million tons of carbon dioxide emissions - contributing to less pollution as well as to less disease. Likewise, the general strike in Spain in late 2012 led to decreases in Spain's national energy consumption, with accompanying decreases in pollution, stress, and dis-ease. And while a critical health recognizes that energy must to some degree be consumed, the critical judgment of a meaningful aesthetics, among other disciplines, must consider that - among other things - the bulk of the energy and work undertaken in present economic production and distribution results less in goods and services than in atrophied health on one end, and hypertrophied illness on the other.

As we consider this latest crisis, and contemplate the various measures policy-makers hope to leverage into being with it (of which the gutting of social security is only the most obvious of the continuing efforts to completely privatize the globe), it is particularly ironic that the implementation of Obamacare is the ostensible precipitant of the shutdown. For let us not overlook the fact that Obamacare does not promote a critical health so much as it allows for the maintenance of a system of normalized disease. That is, Obamacare represents not health so much as its semblance - the Order of the general algia. And the conditions required for justice (which in many respects are articulable as the conditions required for a critical health) demand not the counterrevolutionary austerity of work, production for exchange-value, and dis-ease, but the radical 'austerity' of rest, and critical ease. If our consideration of the classical, medical concept of the crisis elucidates anything, it should lead us to  recognize the degree to which a crisis is, at least potentially, a turning point toward such a critical ease - and that another term for such an actual turning is revolution.

Posted by greenlandresearchstation at 9:58 AM

There's a rhythm to your writing that makes it a joy to read and the logic easy to follow. Keep up the great work!