Welcome to the Planet of the Frankensteins


It seems these days that the name Frankenstein is used to designate not only the scientist Victor Frankenstein, but also the monster he created in Mary Shelley's early 19th century novel. Rather than reflecting a mistake of some sort, however, this may reflect the recognition of a deeper, underlying truth. For while both creator and creation are monstrous in the novel, in many respects it is the creator who is the more horrible. As such, it seems entirely appropriate that his name should come to designate not merely the monster, but the monstrous. 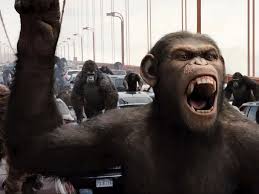 Among other things, it is especially noteworthy that the man who would end up creating the now legendary monster was not only a scientist; he was a rich scientist working in the early days of the Industrial Revolution. Obsessed with electricity – that is, with the union of technology and power – he employed this electrical power to realize his dream of creating a 'life form.’ That he should do so at the very historical moment that new and horrible 'forms of life,' or ways of life, were being shocked into creation throughout the world by the Industrial Revolution and European imperialism – and that these newly created ways of life of the colonized, enslaved, and industrial working classes were indeed monstrous – seems hardly coincidental, irrespective of Shelley's intent. (Also worth noting here is the fact that the quality of the monstrous – in its association with the sublime, as well as in its opposition to beauty – is not restricted to the sphere of aesthetics. Indeed, to the extent that it is opposed to beauty – to fairness (which designates both harmony and that other variety of fairness, justice) – the monstrous also represents the ethical and political concept of injustice.)

Shelley, of course, was not unaware of the fact that she was writing her novel at the beginning of a new historical period. Frankenstein's subtitle, after all, is The Modern Prometheus. Moreover, beyond the notion of modernity, Prometheus himself is symbolic of historical ruptures. A trickster who challenged Zeus’ omnipotence, Prometheus was the Titan who transgressed the rules of the gods to bestow fire (and, more generally, technology) to humanity – mythopoeically representing a moment in the history of humanity that is rivaled in importance by the Industrial Revolution itself.

Following Prometheus’ theft, and his gift of fire, Zeus punished the former by chaining him to a rock on top of Mount Kazbek (where, each day, an eagle would tear out Prometheus’s ever-regenerating liver). Zeus, however, was not content to merely punish Prometheus; he would also punish those who benefitted from Prometheus’ crime. Commissioning the god of technology, Hephaestus, to fashion a woman from clay, Zeus would set Pandora (and her jar of misfortunes) to the world to punish humankind. Indeed, it was by way of her notorious jar that not only disease, but work itself was introduced into reality. That is, prior to Prometheus's theft, there was no disease or work in the world. Relatedly, across the planet that industrial imperialism was increasingly subjugating during the period of Frankenstein's creation and publication, work and disease were being introduced with great rapidity. As Karl Polanyi describes it in his seminal The Great Transformation, European colonizers often introduced work to the natives they conquered. Unwilling to toil for those colonizing their homes, Polanyi relates that the natives would remark that there was no need to work and earn money since there was plenty of food growing more or less wildly for them to eat freely. The colonizers’ response to this was to destroy the freely growing food, creating a state of dependency, compelling the conquered people to work[1] – creating work and disease, just like what resulted from the theft of Prometheus. It was not simply imperialism, though, so much as a new type of industrial imperialism that was transforming the world in the early years of the 19th century. And it is primarily this industrialism – marked by its particularly monstrous electrical, economic, and political power – an electrical power that, like fire (and like capitalism itself) requires the perpetual consumption of fuel – that is represented by Dr. Frankenstein.

Dr. Frankenstein, then, is a monster who creates monstrosities. But not only were conquered natives being monstrously subjugated by the British Crown, and their lands turned into monstrosities; the industrial working class was also being created during this time, and being subjected to monstrous conditions. As such, just as we can see Dr. Frankenstein as symbolic of the forces of science and industry, we can see Frankenstein's monster as symbolizing to some degree the industrial working class and the slaves and other subjugated peoples of the empires - the poor in general who threaten and frighten the dominating classes. These monstrous forms of life, however, are not limited to people. The monster that Dr. Frankenstein created, which becomes hostile and harmful to people, can also be regarded as the natural environment itself. To be sure, with its increasingly destructive hurricanes, floods and other 'extreme weather events', and with its polluted toxicity, all caused by Prometheus/Frankenstein/Industry, much of the natural world today is being monstrosified.

But the monster-making of the combined forces of science, industry, and empire did not by any means end in the 19th century. The 20th century's biopolitical monstrosities are far too numerous to list. Aside from the monumental horrors of concentrated violence witnessed in genocides and nuclear bombings, and the more quotidian forms of diffused violence endemic to modern life, a new technology would find itself attached to the term Frankenstein toward the end of the 20th century: frankenfoods. Combined, like Frankenstein's monster, from sundry parts, frankenfoods are distinct from the monster insofar as they are the result of not so much anatomical, but genetic engineering. And closely related to Frankenstein and genetics, or epigenetics, rather, is Rupert Wyatt’s 2011 film Rise of the Planet of the Apes.

While it may be a coincidence that an actor named Franco plays the Dr. Frankenstein character, the scientist Will Rodman,[2] other structural similarities abound. Indeed, beyond sharing characteristics with Dr. Frankenstein, Will Rodman is also much like Prometheus – for the technology he sacrifices so much to convey to humanity directly creates world-changing disease.

In developing what he hopes will be a cure for Alzheimer's, Will Rodman conducts series of drug tests on a number of apes. But while his experimental drug increases the research subjects' intelligence by extraordinary bounds, the drug also has a deadly side-effect – an infectious disease that, by the end of the film, gives rise to a pandemic wiping out much of humankind – allowing the apes to rise to global hegemony in this Planet of the Apes origin story.

After an accident leads to the cessation of Rodman's medical research program at the beginning of the film, Rodman is forced to euthanize his lab animals. One infant chimpanzee, however, is spared. Although he could have just as easily been named Moses, the infant chimp is named Caesar. Brought to Rodman's Bay Area home, Caesar is raised in Rodman's house like his own child. Possessing an intelligence more powerful, we are told, than that of most humans, Caesar learns sign language, communicates linguistically, and develops into a sophisticated 'person.' In one pivotal scene involving a leashed dog barking at Caesar (who is also on a leash) a distressed Caesar asks Rodman if he is also a pet. And if he is not a pet, what is he? With his unique capacities, assembled by a scientist, this creation of Frankenstein/Rodman – Caesar – is a type of Frankenstein's monster. But unlike Frankenstein's monster, who was entirely alone and alienated in the world, Caesar is not completely unique. There are others, other apes, who are like him. Caesar is not only a type of Frankenstein's monster; he will become a type of Dr. Frankenstein as well.

When a violent incident results in his banishment from Rodman's home to a primate refuge, Caesar learns to live among other apes – and, as befits his namesake, he attempts to organize these apes into an army so that they may resist the abuses to which they are submitted. However, and to some degree illustrating Spinoza’s observation that “Subjection to domination impedes the subject’s ability to use reason correctly,”[3] the other apes are a mostly thoughtless and bestial lot. So, to aid the raising of their 'class consciousness,' Caesar decides to expose them to the Alzheimer drug under renewed development in Rodman's lab. Shortly after the apes' exposure to this drug, their intelligence greatly enhanced, they begin to understand Caesar's plan for liberation. And it is not long before they have exacted revenge on their jailer and climbed out of the compound.

Having freed themselves from the primate refuge, the apes proceed to Rodman's lab where the drug is being studied. Liberating the test apes there, they then head en masse to release the apes trapped at the zoo. And from the zoo, Caesar decides to lead his army to Muir Woods on the other side of the Golden Gate Bridge. It is not long, however, before the police are on their trail. Cutting them off, what results is an exciting battle in the middle of the Golden Gate Bridge – one that calls to mind Occupy Wall Street protesters' attempted occupations of bridges. Rather than marching right into the arms of the police, though, as Occupy protesters often did, Caesar directs his troops to climb over and under the bridge, avoiding and then surrounding the police and ultimately prevailing over their adversaries. And while it may not be fair to expect Occupy protesters, or others, to be able to climb as well as CGI orangutans and chimpanzees, it may not be entirely unrealistic to expect present-day political protestors to employ something approximating Caesar's tactics and strategies – tactics that could have just as well been gleaned from studying Sun Tzu.

At any event, Caesar – the monster of Frankenstein who becomes a type of Dr. Frankenstein himself – winds up leading his wounded army to Muir Woods and safety. And while their freedom might have been only short-lived otherwise, the pandemic that was only flaring up when they were making their escape from the primate refuge has, by the movie's end, engulfed the globe, ensuring that their freedom (from humans, at least) will be a lasting one.

This conclusion, in some respects, mirrors the end of Shelley's novel – for Frankenstein's monster escapes as well, banishing himself to the arctic at the end of the story. The story in Rise of the Planet of the Apes, however, leads one to wonder whether Frankenstein's monster would have risen in revolt had he had the company and support of an army of monsters. To be sure, unlike his cinematic depictions, Frankenstein’s monster was in possession of an intelligence comparable to what Rodman's intelligence drug provoked in the apes. Had he had the company of other monsters, who knows, they might have revolted actively (as opposed to revolting merely passively, committing the daily mini-sabotages people tend to commit in workplaces and other locations across the world[4] – for, just like in Shelley's time, most people today are Frankenstein's monsters of sorts as well). Of course, even though we are told, by enemies and allies alike, that we are all 'singularities,' we are not alone like Dr. Frankenstein's sui generis freak of a monster. We may all be Frankensteins, but in this respect we are less like Dr. Frankenstein’s singular creation and more like Caesar and the apes, together in our alienation. What we lack is their consciousness of their Frankenstein condition(s).

Perhaps the most important question raised by the problematic film Rise of the Planet of the Apes, however, is whether one can free oneself from Dr. Frankenstein (i.e. capitalism and its ideology, and dominating forms of power generally) without becoming a Dr. Frankenstein oneself. And whether, relatedly, we are all, to varying degrees, hybrids of Dr. Frankenstein and his monstrous creation.